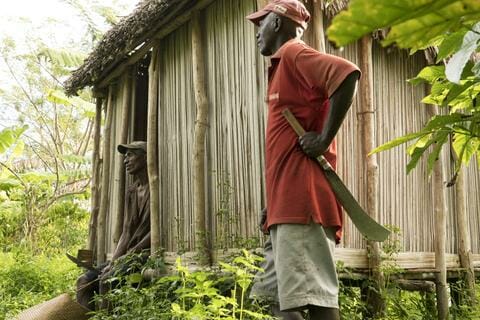 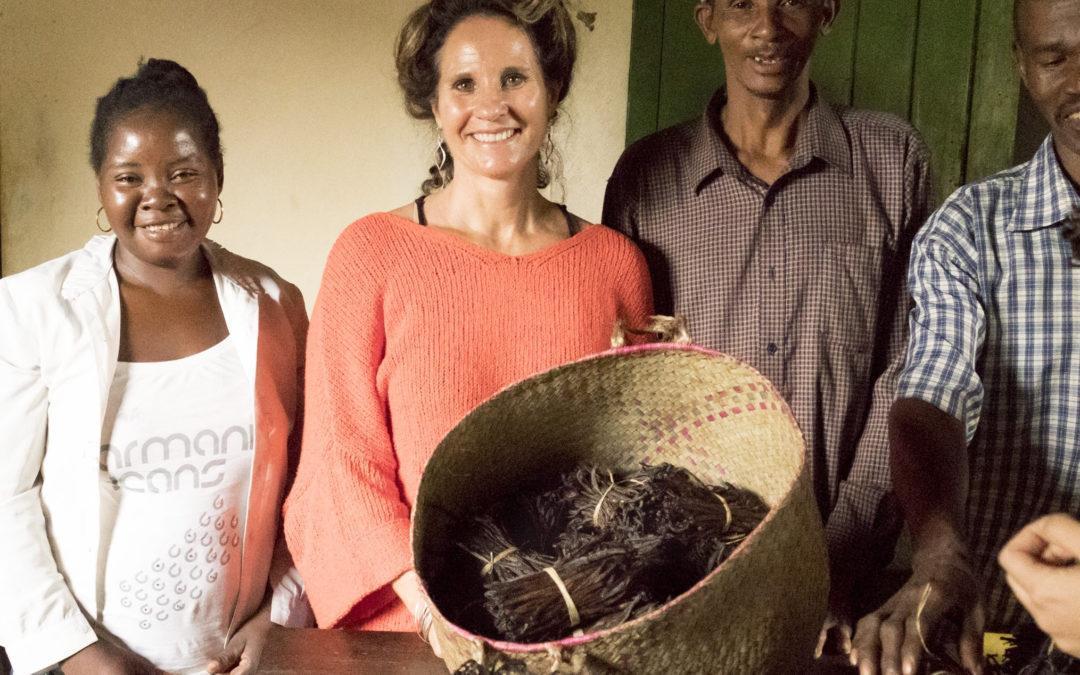 Just when we thought vanilla prices couldn’t go higher, they have.

So what are we doing about it?

In Madagascar, we have partnered with organic specialists as well as working with local independent exporters to secure, supply and monitor quality. Josephine Lochhead recently visited the SAVA to see firsthand what was going on and to build on the work with Cook’s partners.

And this is what she found:

We are just back from two weeks in Madagascar, the world’s premier producer, investigating firsthand the soaring market for green vanilla beans that has caused such turmoil for curers, extractors and you, our customers.

Arriving amid the July harvest, we hoped to find green vanilla bean prices start to soften. Instead, we witnessed a buying frenzy that has startled vanilla market veterans and shows little sign — yet — of abating.

Vanilla prices are headed to new peaks that, adjusted for inflation, are smashing the record set in the 2002 vanilla market price spike and subsequent market meltdown.

Gravity will eventually set in. The million-dollar question is when, and whether the landing will be a crash or a glide path. We saw multiple warning flags of a classic market bubble that behoove caution.   Plenty of market fundamentals could bode a higher floor than we’ve grown accustomed to over the past decade. That wouldn’t be bad news: rock-bottom prices after the last crash paved the way for the current price spike as prices fell below costs, setting off a classic commodity boom-bust cycle.

The million-dollar question is when, and whether the landing will be a crash or a glide path.

We spoke with many curers and exporters in the Sava vanilla region, and spent days out in the bush, meeting with farmers in remote villages seldom visited by travelers.  Working closely with our partners, organic specialists, small custom curers, and large exporters in Sambava, we saw firsthand the psychology and fundamentals of the market. 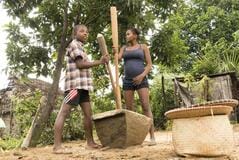 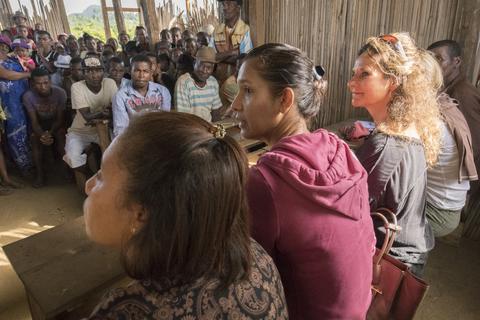 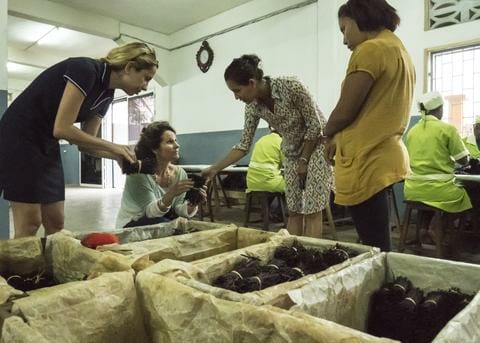 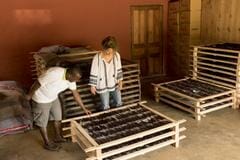 Here’s what we found:

Exporters expected the market for green vanilla beans to open at $20 a kilo (which translates to $120 a kilo cured before curing costs). Instead, the market spiked to $30 and kept going, to $40 and higher. It’s now flirting with $50 a kilo and more.

So many dollars were chasing vanilla beans at the harvest peak that the dollar plummeted 10 percent against the Madagascar ariary, at one point forcing the central bank to truck extra currency to Sambava, and driving the dollar price for vanilla that much higher.

The chief beneficiary of the higher vanilla prices is Madagascar farmers.

Astonishing amounts of money — running into the hundreds of millions of dollars — are flowing to the bush, a place of bamboo villages with no electricity, where rice is threshed by hand. There are no banks here. Investment is difficult, but through our partners Agnes and Naomi, we are helping our organic farmers make investments they’ve requested: a drinking water cistern to avoid carrying water on foot from six kilometers away, and expansion of a tiny one-room schoolhouse of bamboo walls and a dirt floor, with one blackboard, that now serves 225 children.

Farmers are also holding back a hefty share of their production to capitalize on high vanilla prices, adding to the frenzy. We heard how one buyer arrived at a village along with 50 others, only to have the farmers bring out just 50 kilos of vanilla beans for sale.

With Madagascar’s per capita income at $1500, and a kilo of green vanilla beans selling close to $50, incentives for theft and immature picking are powerful. We spoke with farmers who said they stayed up all night during harvest patrolling their vanilla plots armed with machetes, ready to mete out swift justice to would-be thieves.

Food price inflation is on the rise. Buyers are exposed to intense risk, having to travel for days into the remote bush carrying backpacks stuffed with cash.

Vanilla bean quality is getting harder to maintain.  We saw “quick curing” shortcuts and vacuum packing that can seriously compromise aroma, and the sale of “cuts” that in a more normal year would never reach market.

Faced with explosive price increases, curers are requiring upfront cash from extractors like ourselves to buy green vanilla beans, a practice that only hardens the price floor. Vanilla purchases have become a high-stakes game of musical chairs. A price crash can ruin anyone holding expensive inventory. The last crisis bankrupted some of the most storied firms in the vanilla trade.

Vanilla bean quality is getting harder to maintain.

Some extractors tried to short the market earlier this year, going too lean on vanilla beans in hopes that prices would soften. Now they are out of vanilla beans and desperately trying to buy more, throwing gasoline on an already overheated market.

The fundamentals are clear: years of rock-bottom vanilla prices drove out competing vanilla regions and drove up demand for pure vanilla. The concurrent rise of the new American food movement and its focus on pure, artisanal ingredients — none more classic than the exquisite culture of vanilla — hardened demand for high quality, and especially organic, vanilla.

End users — ice cream makers, bakeries and chefs — cannot easily substitute artificial ingredients. But if prices do not abate, we expect to see at least some turn to the new certified organic vanillins that pose a serious threat to the pure vanilla culture.

On the supply side, we are beginning to see high-quality vanilla beans arriving from Papua New Guinea and Mexico as high prices pull new production onto market, along with India, Indonesia and Uganda, all of which have struggled with quality issues in the past. This added production eventually will force prices down.

Meanwhile in Tonga, the last island to harvest—‘Eua—finished harvest with a much shorter supply than anticipated. From the beginning to the end of the season, we saw green prices multiply by six. No one in Tonga has ever seen anything like it, with prices ending TOP $60 higher than the last record price during the 2001 Crisis.

As in Madagascar, growers have been playing waiting games, holding back vanilla to push the prices up.In Tonga, we’re encouraging the growers themselves to cure their own vanilla. In Vava’u, traditionally the vanilla powerhouse of Tonga, we’re gathering the elder farmers together to work with the younger farmers in keeping up the tradition of their exceptional curing skills. Working directly with farmer-curers is a win-win for all sides, and we look forward to building on our thirty-year relationships with them for a generation to come. 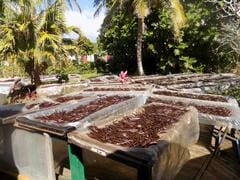 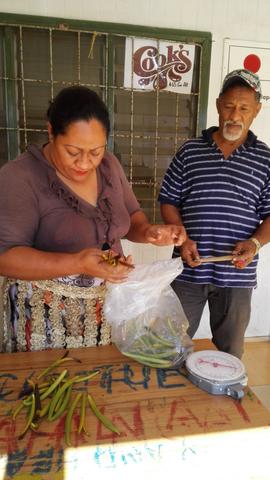 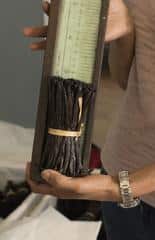 One of our buyers, who built up Tonga’s vanilla industry back in Ray Lochhead’s early days here, is helping to streamline their curing processes and to teach the younger growers the tricks of the trade. We are also working with the youth nonprofit-Tonga National Youth Congress-for sourcing certified organic vanilla. This year has brought prices to a critical level, with drastic impact throughout the food industry.

But our extensive work at origin has also poised us to be ready for the challenges of 2017, whatever they may be. This is the strategy we’re executing, handed down by our dad, vanilla legend Ray Lochhead. We will keep working at all levels of the market to assure you premium quality vanilla at the best possible price, and also to secure the supplies you need now and in the future.

Ultimately, it’s you, our customers, who will determine where prices settle. We make a full range of vanillas, from our unrivaled premium extracts to vanillin blends and vanillin flavors. We’re here to help you weather this storm. Call us with any questions about which product best suits your needs.