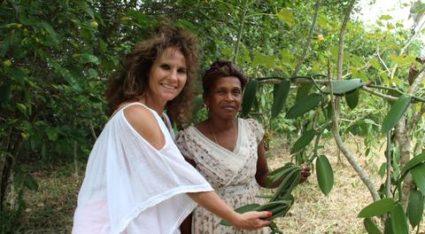 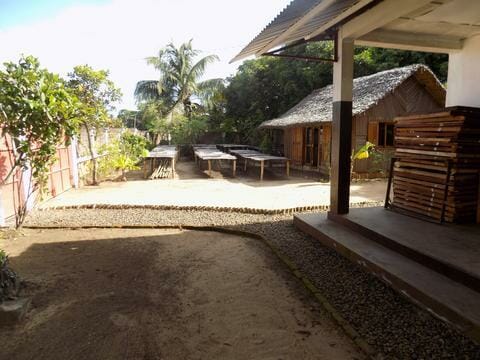 We’ve just returned from a visit to Madagascar’s SAVA vanilla region on the north coast to scope out the market trends and investigate the rampant rumors of tight supply and increasing prices.

Madagascar, one of the Bourbon isles from which Bourbon vanilla got its name, is the fourth-largest island in the world (almost 1 1/2 times the size of California.) The vanilla trade became fully entrenched there in the 1930s, with two major producers in each of the four vanilla towns for which the region got its SAVA nickname: Sambava, Antalaha, Vohemar, and Andapa. Now there are something like 200 curers/exporters and 80,000 vanilla growers, and with this volume, Madagascar governs the global vanilla market and sets the price.

We (Josephine Lochhead and I) started out in Antalaha and then moved on to Sambava. We met with exporters and growers and examined a lot of vanilla. It felt like home—walking down the streets, the beautiful aroma of vanilla was everywhere. The cities smelled of it, and what could be more beautiful than that? We were welcomed by the famous Malagasy hospitality and met remarkable friends. With the help of our trusty interpreter Venat, who has worked in vanilla and plans to do so again, we asked what exactly is going on. 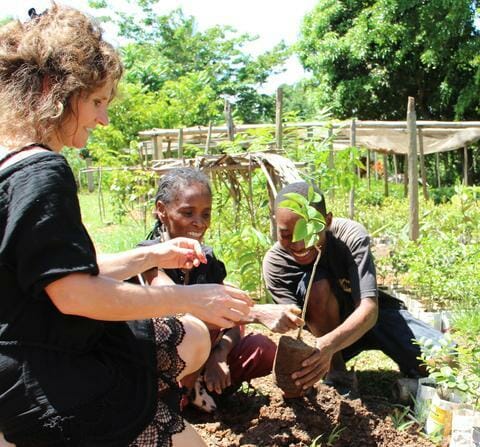 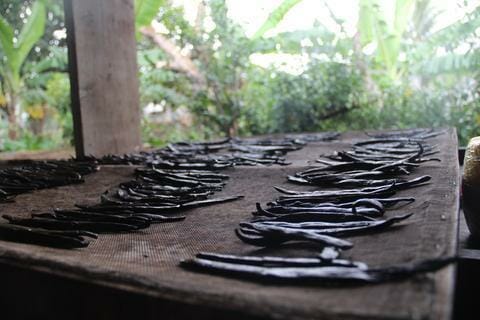 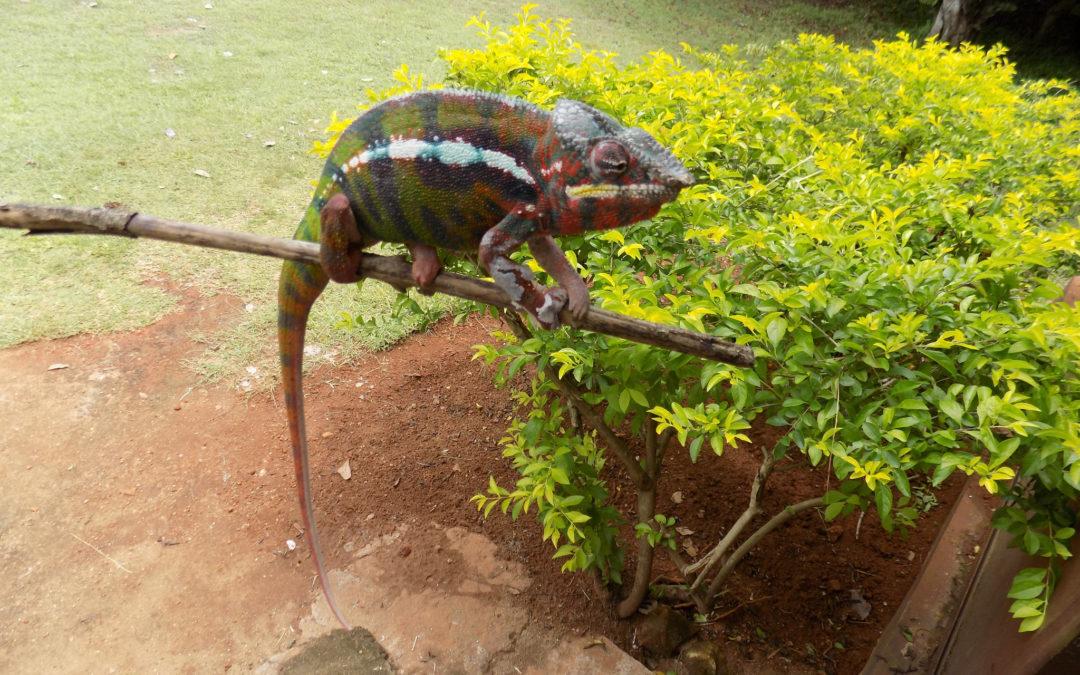 MARKET: WHY ARE PRICES SO HIGH?

What we really wanted to uncover was the reason for these rapidly accelerating vanilla prices. Will they keep going higher, or will the bubble burst? It was hard to get clear answers in a week: we heard conflicting assumptions and explanations. From the best we could make out (from the growers themselves as well as from exporters and curers), the 2015 harvest will be smaller than the 2014 crop, which was exceptionally large (2,400 tons), but still very much in the range of normal. As one grower said: “If one year is big, the next year will be smaller.” From reliable sources, including the farmers themselves, the healthy second flowering in December promises a healthy harvest this summer.

And, because it promises a healthy harvest, prices should have fallen after pollination. Instead, they kept climbing at a rapid pace amid rumors that the quality of the crop will be poor; that the late flowering forecasts an immature harvest because growers, needing cash and wary of theft, will pick them too early. (In every vanilla-growing land this is a problem.) At this point, it’s conjecture: the harvest could turn out just fine. But some exporters are holding up to hundreds of tons of beans in speculation against it, so that they can then sell some of their 2014 lots at much higher prices.

We were also told that many huge buyers tied up the 2014 supply with contracts, drawn by good price (before the first sharp increases) and high quality. Some of the really major players, eager to avoid the horrific crisis of 2000-2001, are buying up huge quantities as leverage against this rumored potential short/poor quality upcoming crop.

One other interesting fact mentioned as a possible contributor to the crunch was money laundering. Yes, you heard it right. Vanilla is being used by rosewood traffickers to cover up their dirty money trail. Rosewood logging is an illegal but hugely profitable industry in Madagascar, and the dealers need to wipe their tracks by storing their money in another pricey commodity—vanilla.

Bear in mind that these inflated cured prices bear no relation to the green price from the farmers themselves, which for 2014 was under $6/kilo. It’s speculation that leads to inflation.

HOW HIGH WILL PRICES GO?

Hard to say. It comes down to who gives first: the buyers or sellers. Right now it seems that buyers want to buy more than the sellers want to sell, so prices are staying high.

Even in the week we were in Madagascar, prices changed by the day. They doubled earlier this season, and have remained unstable ever since.

At least we’re getting closer to the 2015 harvest. We hope it’s a good one, even if speculators are betting against it.

DOES THIS INSTABILITY AFFECT QUALITY?

The lots we saw looked good, overall. The first measure for quality is the maturity of the beans at time of harvest. Because the 2014 crop matured early, its quality wasn’t compromised by early picking: beans have high vanillin content and excellent aroma.

And yet we also saw many tons of inferior beans that lacked good aroma: a sign of the continued practice of vacuum packing beans after just a few days of curing so that they will maintain their weight and ultimately fetch a higher price. These beans will mold, and will certainly not make good extract. We were introduced to “cuts”—immature, short, poor-quality beans—which we were told are now used by many extractors. In fact, some people seemed surprised that we were not interested in them. These cuts were fetching a much higher price than anyone should pay for what are essentially junk beans. We were disappointed to see so many of them on the market.

Customers who buy certified organic vanilla are feeling especially astronomical price hikes. We had heard rumors of mosquito nets being the root cause, but didn’t quite believe them until we got over there. Apparently, NGOs distributed mosquito nets soaked in insecticide (for good reason, as I contracted malaria within the week) all over the country side. Farmers have been using these nets to harvest crops—including vanilla. Analysis showed traces of permethrin and anthraquinon in several lots, which then could not be certified organic.

Of course, not all beans were affected by the netting, but very few exporters bother with the organic certification as the catch-phrase is, “All beans are organic.” This is usually true, for farmers in Madagascar do not use pesticides. But I guess when anti-malarial nets come in the picture, all bets are off.

WILL PRICES GO DOWN?

We hope the speculation will cease. Ultimately it harms everyone: quality goes down as short-term producers jump into the market to sell sub-par vanilla at high prices. The higher the price goes, the harder it will fall, damaging the supply side. Here at Cook Flavoring Company/R.R. Lochhead Manufacturing Company, we are in good shape to watch what unfolds and keep our customers informed. The 2015 crop is, as I mentioned earlier, expected to be well within the range of a normal yield. Until it comes in, any conjecture to the contrary is…just conjecture.

So, let us hope that there is good news ahead. It was a great privilege to meet with exceptional vanilla growers and curers of Madagascar. We are very grateful for the hospitality shown to us by so many—especially Joey Moscovitch (who is working tirelessly on education and other great things in Antalaha—click here) and pharmacist, ecologist, and national heroine Marie-Helene Kam Hyo whose projects are truly amazing).

So, many thanks to all our Madagascar hosts. We hope for a good harvest of great vanilla. And above all, stability.